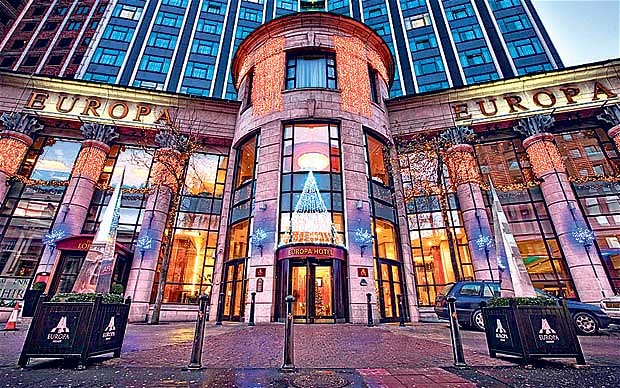 I tried the new add multiple locations thing on backpage and added all the UK locations to see which place I'd get the most responses from. Almost all the calls came from Belfast. I did the same with my friend's backpage ad and her phone was ringing non-stop with calls from Belfast so we went there together for 2 days.

After checking into our hotel, one of my clients told me why the hotel is famous.. It's the most bombed hotel in the world after having suffered 28 bomb attacks during the Troubles.. Good to know. Anyway we both got way more booking requests than we could accept in 2 days. We were very busy there but took time to have cocktails together in the hotel bar, went for an  Ulster fry breakfast and did a taxi tour.

Belfast's history is tragic. Hearing all the awful things that have happened there while looking at the scars left over is truly disturbing. Since The IRA Ceasefire in 1994 and the signing of the Good Friday Agreement in 1998, Belfast is a different place. It's great that they're going to pull down those horrible "peace lines" and a good sign that the council is paying out less and less each year to fund the disgusting 11th Night Bonfires which had already been built when we did our tour.

The council supposedly doesn't fund them if they display "paramilitary trappings and paramilitary flags on or in the vicinity of the bonfire site". They're not to burn "any flag, emblem, posters, effigies or any other symbols". There was plenty of all of the above in evidence. Very sad to see such bigotry and hatred still persisting in today's society. Surely such things are on the way out.

Such a great location. There are many beautiful people there, wouldn't you agree?

Surprisingly, yes. Their history is ugly but modern Belfast is a great place (apart from that awful wall and their "11th Night" evilness)

Love reading your blogs, especially this one. Captures the history so well. The reality of a violent past and current traditions, which in all honesty, should become obsolete.