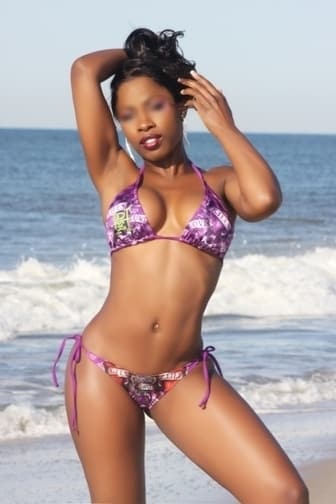 The other night I had the pleasure of meeting the spectacularly sexy Chivana and her gorgeous, bootylicious friend Aleah for a trio with a sexy couple. Chivana found me on rentboy.com at the request of a couple she sees regularly. The gentleman wanted to watch me give pleasure to his wife while he played with Aleah. Before going up to the room Chivana met us in the hotel bar where the bartender made me the best vodka martini I’ve ever had (with a twist of lemon instead of olives since I don’t like olives) on a tab kindly left for us by our hosts. She explained the job to us and that she wouldn’t be participating and let us know what to expect. I was to wait in the adjoining room until they called then walk out in jeans with a bare torso and bare feet ( he hates socks). Then I was to undress the gentleman’s wife and go down on here making her orgasm before gently introducing her to the pleasures of taking my huge Australian cock. He’d be watching and playing with Aleah and then when he and his wife were satisfied, Aleah and I would be asked to leave so that he could have privacy to carry on playing with his wife. Specifically we were to grab our clothes at that point, dash to the spare room, dress up and go ASAP. All went exactly as described. His wife was very hot. She looked a bit like Scarlett Johansson and clearly had a lot of fun with my tongue on her clit and then riding me hard 🙂 She must have said “Your cock is so huge!” in her sexy Russian accent at least a dozen times..

Afterwards, Aleah and I went back to the bar to debrief with Chivana. Had another awesome Martini and a nice chat and said our goodnights promising to meet again next time we’re all in Manhattan. I also offered to show them around in London whenever they’re there. Both really nice and stunning girls and the slight southern twang in Chivana’s accent especially gave me shivers!

Off to Dubai tonight for a few weeks of sun, beaches and more sexy adventures ✈