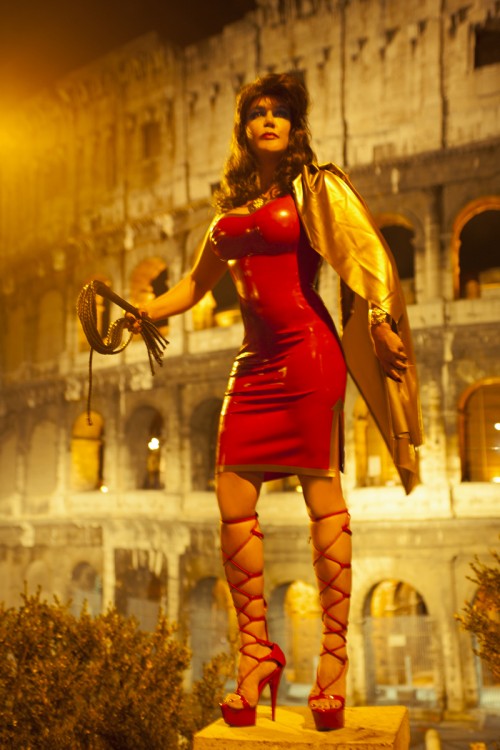 I was invited to join Domina Octavia and her client along with another male escort, Alex for a forced bi session at Octavia's Dungeon in Earl's Court the other day.

Octavia is also highly skilled in the ancient art of Japanese Rope Bondage known as Shibari or Kinbaku. Japanese Rope bondage is an expression of our deeply rooted desire for submission and domination.

Alex and I both arrived early and were greeted by Domina Octavia, resplendent and imposing in black latex and stilettos, and were directed to her spare room to undress and wait until our client had arrived. Once he had arrived and been restrained with cuffs and chains in a standing crucifix position, Octavia summoned Alex and I and stood us in front of her helpless slave where we both made sure he got a good look at our throbbing, rock hard cocks while Domina verbally humiliated him with a tirade of abuse. Chastised in no uncertain terms, her slave was quivering and stammering his responses partially in excitement at the prospect of losing his oral and anal virginity to two powerfully built, massively hung young studs and partly in terror of the terrible beating he'd be punished with by his Domina if he failed to pleasure us to her satisfaction.

At length he was released from his shackles and forced to his knees. His life long fantasy about to become a reality he eagerly opened his mouth wide and on Domina Octavia's command I slowly eased my cock past his lips. He was tense at first but soon got over his nerves and went from timid virgin to expert cock sucking slut in a matter of minutes. Octavia ordered him to come up for air but no sooner had he drawn breath than she was forcing his head down onto Alex's cock. He'd have happily fellated us all day given the chance but it was not to be. Octavia took control once more and soon had him suspended helpless a few feet off the floor in a sling hanging from steel chains. His wrists and ankles cuffed once more and his raised legs spread leaving his asshole exposed and positioned at the perfect level and angle for us to use him.

Domina reminded him of the consequences should he fail to pleasure Alex and I while she lubricated him and opened up his ass with a small dildo.  We tag teamed him relentlessly and without mercy. His virgin ass was ours to use and use it we did. The sling is a great labour saving device when fucking an inexperienced bottom since there's no need to waste any energy wrestling them into the best position or overwhelming their resistance when they tense up or writhe and twist involuntarily. The sling simply holds them right where you want them, powerless to resist, so all your energy can be put into thrusting hard into their helpless ass.

By the time we let him down from the sling his legs were weak and shaking from the overwhelming physical sensations he'd experienced, from intensity of the pounding and from the physical strain taken by his muscles from being held in the sling. He could barely speak at first but he understood Domina's harsh words as she gave her scathing review of his poor oral technique and pathetic whimpering on the sling. Nevertheless she did praise his new found enthusiasm for cock sucking and his resilience for having stayed in the sling longer than she'd thought he'd be able to withstand. He was relieved and overjoyed at the reward that was to be his. Back on his knees with his head jerked back and mouth yanked open by Domina, he soon received two big mouthfuls of hot spunk from Alex and I. Always a pleasure to take a cherry and it was plain to see he had a great time too with a smile on his face and a load of cum dripping down his chin.

Looks and sounds absolutely amazing and I and now totally convinced that is some that I and gonna do when I've saved up enough as I believe you should try everything once, including being forced to my and having my hands tied behind my back with a larger than life cock shoved down my throat 🙂