A handsome gentleman from Hong Kong, Mr C. A man in need of expert instruction and guidance for his first experience with a real cock. He'd been fantasising about a forced-bi and cuckolding scenarios for many years and practicing with Mistresses and strap-ons. Finally the time had come to experience the real deal.

Mr C and Mistress Eve met at Eve's dungeon and spent an hour together getting acquainted, building a rapport and mutual understanding of Mr C's fantasies, desires, turn-ons and limits.

I was scheduled to arrive just before the end of the first hour so I'd have time to shower and join in for the second hour. 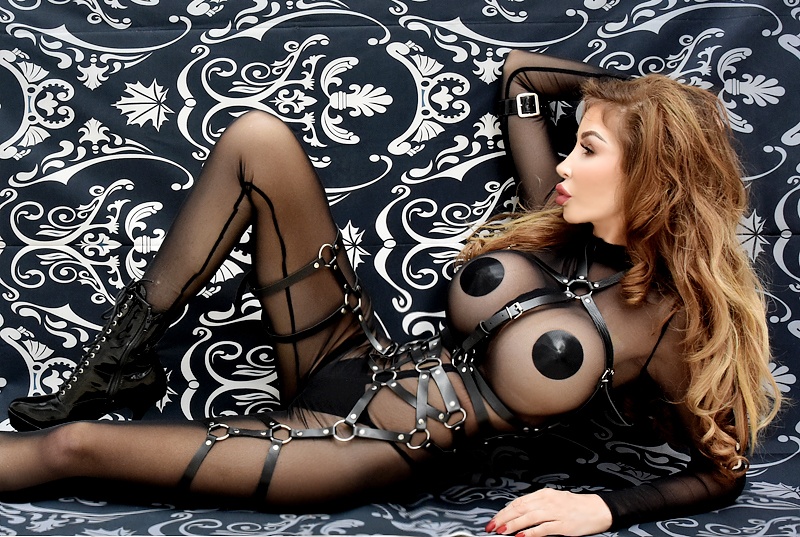 I said a quick hello to Mr C, spread-eagled naked on the bed, blindfolded, his balls firmly secured in a cuff and a butt plug peeking cheekily out from betwixt his firm young buttocks.

He looked like a man already in sixth heaven having had many of his erogenous zones tickled by the most expert of ticklers. He radiated an aura of eagerness in his anticipation of a long awaited experience about to launch him into seventh heaven. My cock just the catapult to fling him into the clouds. The ballista to fire him onto Abraham's bosom. The trebuchet to loft him into the temple of Xanadu.

I showered and returned naked to find Mr C enthusiastically riding a large strap on. "Mind if I join in?" "Absolutely! He has two holes, we'd best put them both to good use!" There's a sentiment I can get behind.

I positioned myself just out of reach of Mr C's eager lips. So near, but yet so far. Blindfolded, he couldn't see the cock he was soon to suck but he could feel my weight on the bed in front of him, sense my presence as I knelt with my now rock- hard big down under tantalisingly close to his face.

Each strap-on stroke from Eve from the rear jolted his face toward my crotch as I allowed my cock to just brush his lips at the apex of each thrust. His wide open, wet lips and eager tongue reached for me. I made him wait until it looked like he was willing his DNA to mutate and somehow evolve a giraffe neck, or loach lips, or a chameleon tongue. Anything to cover those last few inches between him and his one desire.

I relented and allowed him his first cock kiss. It was very romantic. A tender and intimate moment. Then I grabbed the back of his head and pulled him down and held him there. Choking, gurgling, gasping, tears streaming, streams of saliva flowing over my shaft. Just the way I like it. "Don't be shy, no need to get embarrassed if you choke. I love it when they struggle."

Mistress and I gave each other the traditional high five over the back of our spit roasted sex toy. Important to observe the protocols.

Then we conferred whether it was time to swap ends. Mr C was also allowed to express an opinion on the subject. He spun his buttocks cock-ward like an excited puppy chasing his tail. I took that to be a "yes."

I lubricated copiously and started slow but Mr C was no delicate virgin. He was soon pushing back wanting it deeper and harder.

Eve and I composed a duet on his throat and ass in perfect harmony. Mr C was our conductor. The waggling of his little baton beating a tempo followed perfectly by a renowned ensemble of two.

Sounds like an epic session - once again, an extremely entertaining read! 😀