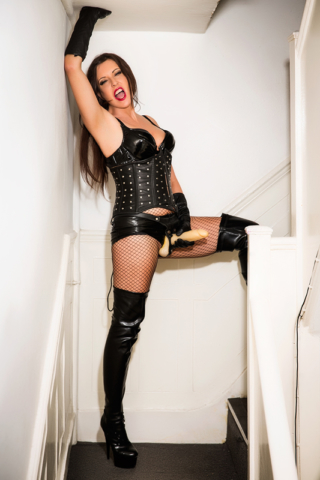 I had a forced-bi duo with Mistress Allure last week. She kindly invited me to come and assist her in training a slave to suck cock and take an ass fucking. I arrived at exactly the appointed time. Punctual as always. It's the least one can do really in the momentous occasion of popping someone's cherry.

Mistress Allure let me in the front door of her securely gated, barred and bolted basement dungeon. Her slave in the appropriate position of obeisance forehead to the floor, knees apart, back door wide open.

Back door guests are best they say.

I greeted Mistress Allure with kisses and her slave with a firm slap on the ass. She'd instructed him to keep his eyes down and stay in position until he received permission to look up. I did see him take a peek at his Mistresses beautiful stocking clad legs as her extremely high heels clicked past his face.

Lucky for him his peeking went unnoticed. My heavier booted footfalls behind him drew a quiver of anticipation. I'm sure he'd seen pics on my site and knew what he was in for.

I disrobed, washed up in the bathroom, and at Mistress bidding, stood a foot or so in front of her slave. At last he got permission to rise to a kneel finding himself eye to eye with 9 inches of Australian trouser snake.

We adjourned for a bit of light lubrication and Mistress Allure administered a pegging. I ensconced my monstrous antipodean appendage in a king size condom, lubed up and assured him I'd be gentle. We corralled him against the spanking bench and Mistress held him down. Our slave awaited his impending penetration with the trepidation of a steer about to get branded. A few more soft words of encouragement and stroking of the buttocks. Eventually I could see a bit less of the whites of his eyes and he was breathing normally. People often tell me I'm a calming influence and indeed a certain calm did descend upon our slave. Soon he seemed ready for Prince Charming to carry him over the threshold. We decided to forego the candlelit dinner and long walk on the beach at sunset but I think his first time was very special.

u/suitable-brick was asking for advice about male escorts for couples on reddit the other day.

Most male escorts will be willing. Very few will be able. I see male and female clients. Single women clients are very rare but occasionally I do get booked by single women. I specialise in couples, duos with female escorts and Mistresses. I do a lot of cuckolding and forced-bi.

I'm based in London, UK but I tour USA every year. Try searching for "male escort + the name of your area"

and contact male escorts who have their own website, attractive pics and description, seems professional, has a regularly updated blog and social media, has good, recent and regular reviews, plenty of duo partners who also list him on their site is a good sign. It means he's reliable or they wouldn't list him. Even so, in my experience from trying to find male duo partners, the guy will probably be useless.

If you go on a directory and just choose a male escort at random, you have a very poor chance of a good experience. The majority won't show up or will show up very late, either won't be able to get properly hard or won't stay hard, a lot of them will get distracted from what you want to do and try to steer the session towards what they're into. Some will have very little interest in making the session about what you want. Some will be incapable of understanding what you want ie not professional at all. I've given up trying to do duos with male escorts.

Now when my clients ask me to arrange a duo with another male escort. I say "I don't know any reliable male escorts, sorry." I've been escorting over 10 years and attempted dozens of duos with male escorts in that time but none of them were any good. A lot of them were high or desperate for drugs which seemed to be the main factors impairing their performance. Maybe choose a guy who fits the description I mentioned earlier and then ask if he wants to get high with you. If he says yes, don't see him. Choose another guy.

Have you tried just posting on a dating site? For a lot of men, this is their biggest wet dream.

True. But my experience of couples who want to involve another guy is that they don't just want to satisfy that guys wet dream. They have very specific ideas about what they want to do and don't want to do. The only way they'll have a good experience is if they're with a guy who's only priority is making the couple's fantasies reality.