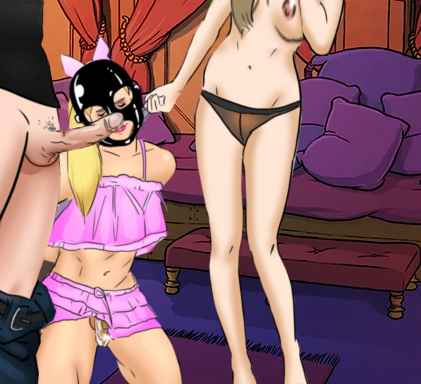 I got a message from my boobtacular neighbour Mistress Charlotte yesterday in urgent need of a stud with a giant cock with which to facefuck a sissy.

I was to wear a mask, as would sissy. Thus the ensuing throat rape could be preserved on film for posterity.

He'd asked that only Charlotte speak during the session. He and I were to silently obey instructions.

I arrived on time to the second and was greeted at the door by Charlotte, straining at the blouse buttons. She went back to her boudoir. Superior posterior. Shortly preceded by her bodacious babylons.

I excused myself to the bathroom to wash up, disrobe and don mask. Suitably attired, naked, I followed my already rock hard cock to its target like a 9 inch laser guided tonsil seeking missile.

Concupiscence on a mission.

Sissy's pretty red lipstick and eye make up, complete with long fake eyelashes, peeked out from the eye and mouth holes of a lycra hood. Sissified to perfection but soon to be smeared in gag induced spit and tears, faceslapped by my engorged member, lips smeared against my balls.

A makeover with a difference. "That pretty makeup won't be pretty for long when my stud facefucks you". Is a line you don't hear every day at the beauty salon.

Sissy fellated me with exemplary technique. Sloppy. Plenty of throat and not too much suction or pressure from the lips. Just the way I like it. Clearly loves the cock. Nothing like a tasty pickle to give your tongue a little tickle.

In accordance with the order I received from Charlotte to redecorate her sissy, I proceeded to beat my dick like it owed me money. Ultimately making a face like a drunk hooligan getting tasered and provided the necessary footage for a makeup removal tutorial.

Hey! I'm an aspiring male escort. So i've topped (safe only) a few times before but i usually have alot of trouble staying hard and so i tend not to take those jobs. Will using a cock ring keep me hard? or does it just kind of help a little bit. Also if the answer is yes is there a type you recommend? Thanks!

I have a clear silicone cock ring I got from amazon. The brand is Ring O. It came in a pack of three and the largest of the three fits perfectly. It can help with staying hard. I never have that problem but I sometimes take a quarter of a viagra half an hour before a session. I can get hard without the viagra but taking it just makes it quicker and easier to get a full erection back if there's a lot of stop and start. My balls tend to retract and ascend a bit so the cockring helps… Read more »